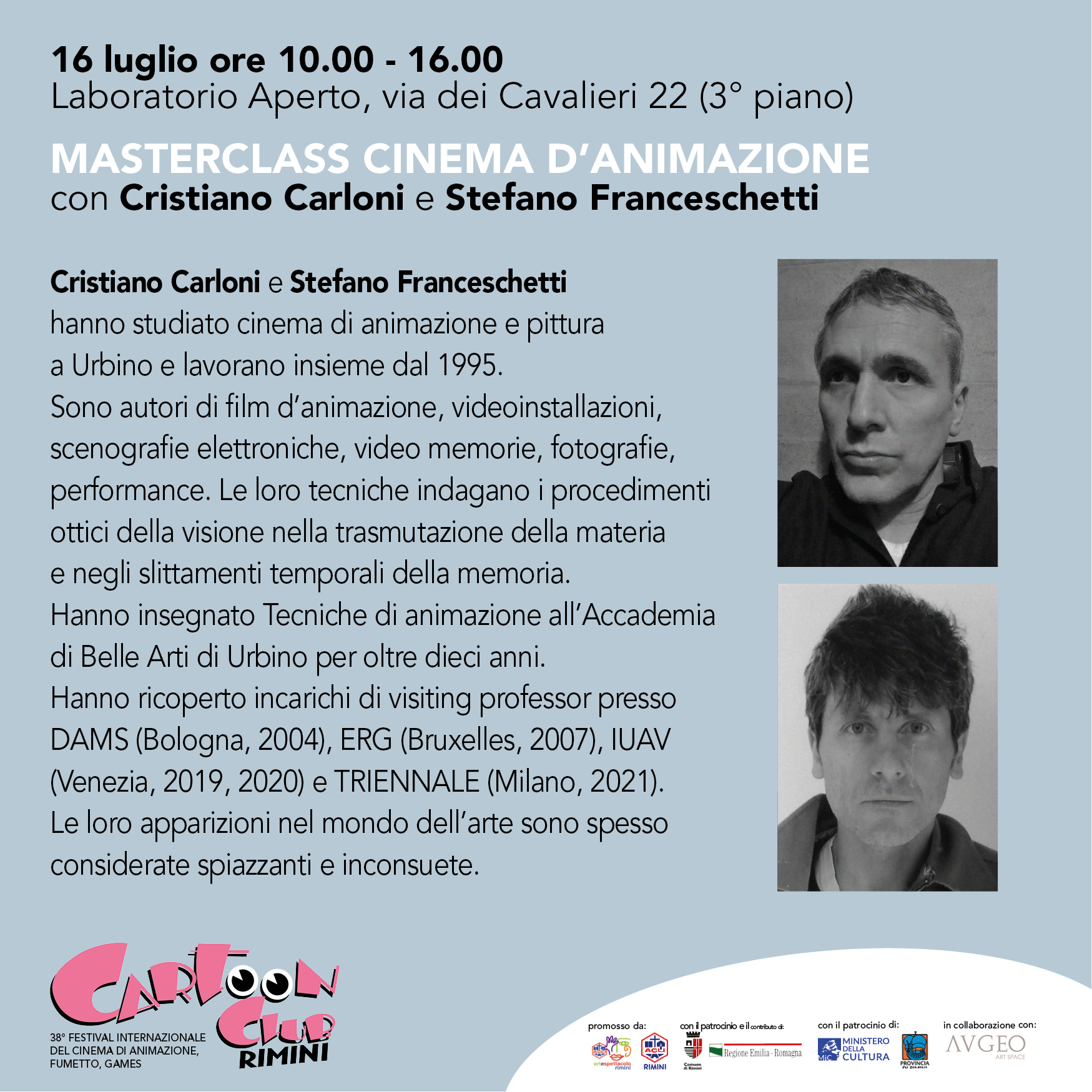 Free admission with reservation at organizzazione@rimini-comix.it

A journey of discovery of the relationships between art and animated cinema in the company of two of the most surprising artists of contemporary Italy. A journey that starts from their project Esso: Shadows Oozing Gold that connects contrasting figures but common above all for their relationship with power, with religion, with teaching, with the use of language and communication aimed mainly at the lowest, humble and ignorant layers of the population. “They are the figures of Christ, Mussolini and Pasolini. Sedimented figures, directly linked to the history of our country, its culture and its education, who have left an indelible mark through what they have said and done. Clearly ambiguous figures, invisible by censorship, deformation or over-visibility, misunderstood both in life and after death. These figures have descended into hell and preserve in the body, engraved, the trace of the hatred of which a people is capable”.

During the meeting the two internationally renowned artists from the Marche region will accompany the participants in an educational and training path through the vision of the works of the cycle, revealing techniques, allusions, quotes, stratifications of signs and senses … A free masterclass dedicated to art students, animators or simply curious, who will be able to discover the secrets of an artistic creation that has its roots in history, communication and art of the last century.

It: Shadows Oozing Gold, dedicated to Pier Paolo Pasolini on the centenary of his birth, is one of the four winning projects of the X edition of Italian Council, a program to promote Italian art abroad of the Directorate General for Contemporary Creativity of the Ministry of Culture. The cycle comes to light through the use of specific and changing techniques and languages such as animated cinema, video art, installation, performance, theater and photography.

Long-time teachers of animated cinema, the two authors have repeatedly declared that over the years they have acquired an extremely penetrating and inquiring look at art and life thanks to their work on the twenty-fifth of a second.

Cristiano Carloni and Stefano Franceschetti studied animated film and painting in Urbino and have been working together since 1995. They are authors of videos, installations, electronic sets, animated films, photographs and performances that appear in the art world in an unsettling and unusual way. Their techniques investigate the optical processes of vision in the transmutation of matter and in the temporal shifts of memory.

As teachers and artists they have long worked with educational and research institutions, as well as inaugurated, promoted and consolidated permanent courses in the audiovisual field. They have taught Animation Techniques at the Academy of Fine Arts in Urbino for over ten years and held positions as visiting professor at the DAMS course – Disciplines of arts, music and entertainment of the University of Bologna (2004), the École de Recherche graphique in Brussels (2007), the MASTERS MOVIES – Moving Images Arts of the Iuav University of Venice (2019, 2020) and the Triennale di Milano (2021).